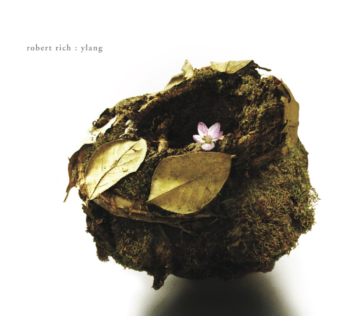 Lilting in and out of this heady atmosphere of South Indian music and minimalist space jazz, the voice of art-pop virtuoso Emily Bezar adds a feminine intelligence to several pieces, and subtle melodic guitar additions from Haroun Serang augment Rich’s soaring lap steel distortions. With acoustic bass from Paul Olguin and string additions from Forrest Fang and Hans Christian, the sonic texture warms to a glowing woody earthiness. Rich’s audiophile production and delicate sound design glue the textures together into a seductive and inviting mossy nest. From these disparate elements, Ylang forms a sonic entity unto itself. While some “world music” may sound like a blur of undigested motifs, Ylang sounds like… Ylang.

Robert Rich uses analog synthesizers by Synthesis Technology, microphones by ADK, Josephson and Blue, preamps by Millennia and TAB, software by Apple, Audio Damage, Camel Audio, Izotope and Flux, among many other tools, with gratitude to those who seek excellent sound. Many thanks to Dixie and our friends who help along the way.

Art and design by John Bergin.