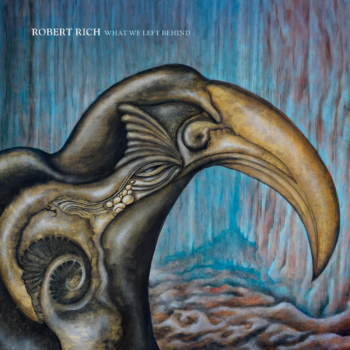 Robert Rich – What We Left Behind

A recurring dream of the earth long after we are gone, a flight on black-feathered wings to overlook what could have been, lush and thriving in our absence.

Robert Rich wants you to understand that long after all the people are gone, long after we’ve wreaked our havoc on the planet and faded from memory, the planet’s just going to keep going about its business. On What We Left Behind, he takes us on a sonic travelogue to that place, lush and verdant and pulsing with life. With the scene-setting burst of thunder and squawk of bird sounds that introduce “Profligate Earth,” Rich jumps right into giving this release an organic, primal tone. Percussion forms the heartbeat of the new ecosystem that thrives beautifully in this place, as flute and synth tones breathe and sing. He proceeds to produce smooth, flowing order out of the initial chaos, and gives us the space to look around. (And me, I like what I see.) On “Raku,” things darken up a touch as we begin to explore, pushing into the overgrown scene. If it feels a bit ominous–and believe me, it does–it’s the feeling of being a stranger in a strange land, everything within sight weird and wonderful and worrisome all at once, your head ringing with What is this place? and What happened here? The flute takes a strong lead on this track, laying down the narrative. It strikes me that What We Left Behind is very much a flute album. In among all his complex, deep electronics, it’s sometimes easy to forget that Rich is an accomplished flute player. These curling, vivacious lines and swaying, humid tones definitely solidify that understanding. If you like flute, there’s plenty here to dig on. “Transpirations,” for example, brings the flute work right to the front, soaring over serpentine synth stretches and a mildly unnerving manipulated vocal sample of (what sounds like) a child’s laughter. This one briefly takes a strong tribal turn as Rich drops in some heavy drumming–but he never lets it overpower the flute. It appears, adds texture and drama, then slides back. Balance is everything here, as is the art of creating well-painted canvases of sonic impressions. The clatter of hollow chimes running through “Voices of Rust” perfectly conveys the image of tattered pieces of our industrial detritus hanging windblown and forgotten in this revived world, adding their voice to the world of wild sounds around us. “Corvid Collections” packs much the same feel as it darkly plods forth, eerie flute tones matched up with clanging, gong-like metallic backdrops and a tribal pulse on thick drum sounds. This feels like a forbidden place, and we are not entirely welcome here. Loneliness pervades the minimal drone of “After Us,” where small sounds skitter beneath our feet. Rich just hangs long notes out there like the realization of what we’ve done. The title track, which follows, is a full, cinematic piece, a vista from a high vantage point, and between the bold melodic lines and the pulsing percussion, we get a sense of the scene’s reclaimed majesty. This piece swells and seems to keep gaining strength. On top of that, from a beat standpoint it’s a little catchy. (Perhaps it will only be me who head-bobs along with it, but I doubt it.) In the closing track, “Meeting Face to Face,” Rich pulls out one final surprise: a guitar. Its crisp, homey feel shines amid floating pads and angelic vocals.

When I noted on my Facebook page that I was listening to this for review, a commenter referred to it as “a modern classic.” I have to agree. The hours that I have spent looping this over and over have been time very well spent. There is a full, real, and honest environment created here. There are vistas and glimpses, color and texture, and emotion to spare. It winds through its dark places so that when the light shines on this reclaimed world. everything is brighter, more beautiful, and very, very alive. A stunning album from one of the true masters of the genre, this is a must-own release that’s going to hit every “Best Of” list.

Recorded 2014-2016 by Robert Rich at Soundscape, Mountain View CA.
Mixed and mastered by Robert Rich at Soundscape in 2016.
Sonic additions by Forrest Fang (2016) on #8 and #9.
Abstractions of Chari Chuang on #1.
All crows unofficially non-union and paid peanuts.
Instruments: prepared piano, Haken Continuum, PVC flutes, lap steel guitar, percussion, DSI Prophet 12 and 6, Korg Wavestation and M3, eowave Resonator, MOTM and Eurorack modulars.
Thanks for assistance from Paul Schreiber, Dave Smith Instruments, Ed & Lipoid at Haken, Chuck at Noise Bug, Old Crow, Andrew at 2C, Izotope, STG, Audio Damage and so many others, plus of course Dixie and all of you who listen.