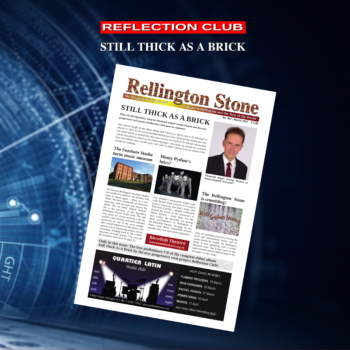 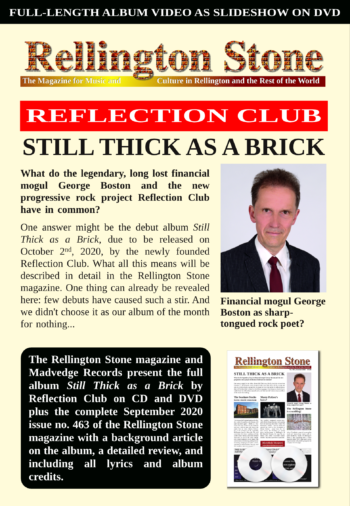 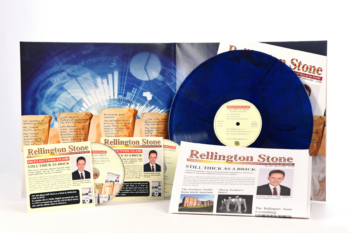 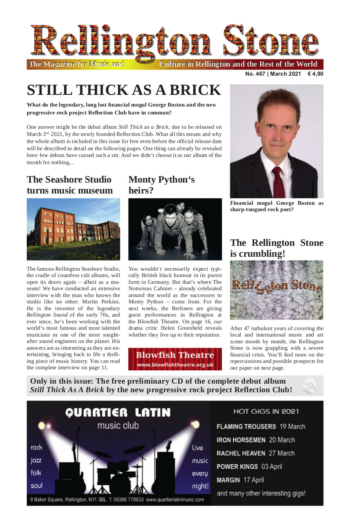 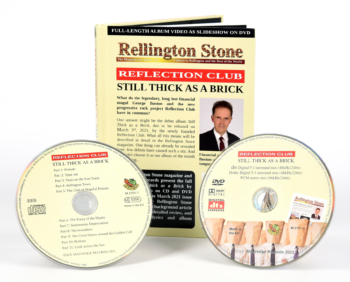 Purchase the album and support Reflection Club and download what you want of 96 kHz 24 bit 5.1 & stereo FLAC.
It is one file for the whole album and you can drop the CUE file into a media players like Foobar2000 or VLC for full access to the song breakpoints.

Streaming with 5.1 sound of Part 5: The Club of Hopeful Pinions. Stereo streaming on Bandcamp.

Teaser of the album with 5.1 sound

Concurrent to the psychedelic rock formation MARGIN the multi-instrumentalist Lutz Meinert from Berlin, Germany launched the progressive rock projekt REFLECTION CLUB in 2017. With international participation he immediately began recording for the debut album Still Thick as a Brick. In this project Lutz Meinert (keyboards, bass, drums & percussion, background vocals) colloborated with the German guitarist Nils Conrad (CRYSTAL PALACE, ex FOR YOUR PLEASURE), the American flutist Ulla Harmuth and the English singer, acoustic guitar and flutist Paul Forrest (JETHRO TULL EXPERIENCE, ex DAYGLO PIRATES).
It is no coincidence that the title of the album brings to mind the 1972 masterpiece Thick as a Brick by the British rock band JETHRO TULL. This debut, however, is not a remake of Thick as a Brick. Instead Still Thick as a Brick is a tribute to the legendary classic. REFLECTION CLUB picks up the musical style of JETHRO TULL during their progressive rock phase between 1972 and 1973, expands on it with elements of jazz and fusion and creates a novel, nearly 48-minute-long, original composition, divided into 11 parts.
Like the 1972 classic predecessor Still Thick as a Brick is also a complex concept album. It contains a complete issue of a music magazine with a background article illuminating on the narrative background of the album, which can also be gleaned from the printed lyrics included.
Beyond that the story, on which the album is based, is visualised by an accompanying video as slide show, which extends over the entire HD stereo and surround mix on the attached DVD.
5.1 DVD surround review written by Wesley Derbyshire (click here)
“Tull prog that is not copied, but inspired, arranged and produced with passion and compositional substance. Singer Paul Forrest shines, the fantastic presentation leaves nothing to be desired.”
www.eclipsed.de

“All in all the music is captivating. Very well done, with a love for the original. More prog classics should be picked up in this way.”

Full members of Reflection Club, who where significantly involved in the production:

Ulla Harmuth flute on all pieces except Part 2: Time out

Some strong-voiced members of the Rellington Football Club – Shouts and insane noise.

Lead vocals, acoustic guitar and flute on Part 2: Time out recorded by Paul Forrest at Woodland Studios.
Electric guitars recorded by Nils Conrad at Bottstaedter Studio, Schwante.
All other instruments and background vocals recorded by Lutz Meinert at Imago-Studio, Berlin.
Mixing and mastering of stereo and 5.1 surround sound by Lutz Meinert.