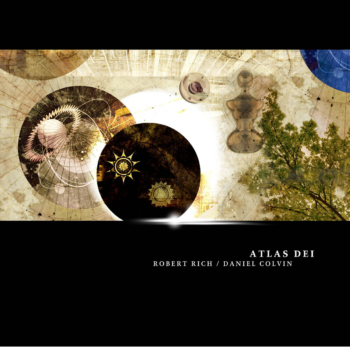 Is also part of the Blu-ray (BD-R) ‘Robert Rich   2007 – 2011’
The film Atlas Dei takes a lyrical journey through time and space into the mystery of our cosmos. On this feature length film, musician Robert Rich and filmmaker Daniel Colvin weave the strands of science, myth, and poetic vision into a powerful and compelling tapestry of the human enigma.==============

Atlas Dei is an astounding visual and musical creation, with images by Daniel Colvin and soundtrack by Robert Rich. It is an all digital high-resolution art film combined with a 5-channel surround sound mix. Rich used the film as a backdrop during his most recent concert tour. Music from Atlas Dei contains 66 minutes of the new tracks created specifically for the DVD, along with some of the remixed older pieces.

If you are a fan of Rich, both the DVD and CD are an absolute must. Colvin’s images are a perfect compliment to Rich’s music, and the DVD holds up well to repeated viewings. Under Special Features, there is a Commentary that is well worth listening to as well. Rich and Colvin expound not only on the film itself, but also on the creative process itself, their philosophic and scientific outlooks, and their own artist endeavors. While I have read many interviews with Rich and have met him on several occasions, I learned quite a bit more about his outlook on music from listening to his commentary.

The film is composed of a series of constantly changing, intricately rendered 3D images, juxtaposed and layered on top of each other. Greek statues, deep space, geometric shapes, trees, grids, 16th century maps, impossible landscapes, and lots of other images from deep within Colvin’s subconscious slowly arrive and dissolve on screen. The DVD is divided into 8 chapters ranging from 10 to 15 minutes, each exploring different aspects of the story. And what is the story? Essentially, the film attempts to communicate the wonder and mystery of the Earth, its inhabitants, and the cosmos. Through images and music, the film explores art, biology, chaos vs. order, cosmology, human accomplishments, macrocosms and microcosms, myth, natural vs. human-made objects, science fiction, technology, and lots more. It’s all presented in a very cool, surreal, nonlinear, organic, dream-logic sort of way. The music is comprised of edited, layered, remixed, and augmented tracks from Sunyata, Gaudí, Troubled Resting Place, Below Zero, Echo of Small Things, and Electric Ladder, plus several new pieces. The surround sound mix of the music is worth the price of admission even when you turn off your TV and just listen.

If you are unfamiliar with Rich’s music but still a fan of space ambient music, you must get the DVD. It visually and sonically encapsulates the rich rewards of experiencing this genre of music.

(Written by Brian Romer for Electroambient Space. Thanks Brian!)